Renge Onsen (蓮華温泉) has ascended to my list of the top ten Japanese hot springs. Outside hot springs are scattered around a steamy, pristine environment with jaw-dropping views of mountain peaks and forested valleys that stretch as far as you can see. The elevation of this Japanese onsen is 1,475 meters (4839 feet). Boiling water and steam naturally rise from the rocky ground. Four small baths separated from each other provide bathers with a feeling of being isolated from the world. The closest building to the Renge Onsen Lodge is a traditional family-run soba restaurant about half an hour's drive down the mountain.

My wife and I visited the outside baths, or rotenburo (露天風呂), in late October when the lodge was closed for the beginning of winter­. No one is supposed to enter the baths after the lodge is closed. Lost in the scenery of the surrounding mountains and fall foliage, we missed the small "Do Not Enter" sign that was posted in front of the lodge. I had previously read in a guide book that the natural springs are located on a hill above the lodge, so we just walked around the lodge and continued our hike. This added another kilometer or so to the eight kilometers that we had, in splendid solitude, already walked along sparkling rivers and a highland road covered with multicolored autumn leaves that crunched beneath our feet.

The photograph below shows the path leading from the hotel to the rocky area where hot fumes and boiling water rise to the earth's surface.  The four baths almost ring the heated earth. 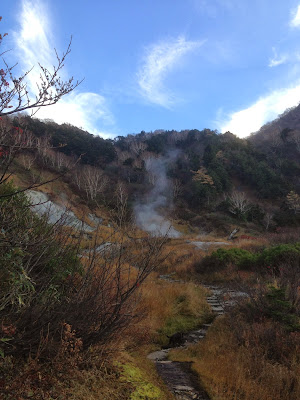 The next photograph shows the first bath that we discovered. It would be comfortable for one person and very romantic for a couple, who might want to enjoy a kazokuburu, which is Japanese for family bath. It was pleasantly warm despite the cool weather. We hiked upwards to see more. The next bath was large enough for four to six people, but the water was cold, so we kept searching and discovered another bath higher up the mountain. 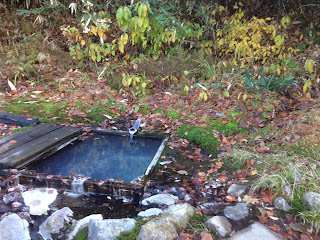 This bath, named Yakushiyu (薬師湯),  was heaven for my wife and I. We stripped right there and soaked in the hot and slightly sulfurous water. There are no changing rooms. Renge Onsen Lodges's website explains that Yakushiyu's water contains acid sulfate, which helps to heal the following ailments: arteriosclerosis (hardening of the arteries), chronic dermatitis, cuts, and burns. The informative A-to-Z Photo Dictionary of Japanese Buddhism taught me that Yakushi (薬師) translates directly into English as "medicine teacher." Yakushi Nyorai is the name of the Japanese Buddha of medicine and healing.

While we were bathing in Yakushiyu, a cold wind blew over the snow-covered peaks above, but our bodies were heated by pure hot spring water. Due to the coming fall of night, though, we left without finding the fourth hot spring bath that I had read about. We had to walk the last several kilometers in the dark with just a miniature flashlight since we departed later than was wise. At one point, we heard the sound of a heavy animal walking in the brush towards us, but luckily it turned back upon hearing our bear bells and loud voices. Renge Onsen is in backwoods country, where spotting a bear is not uncommon.

The next day, my wife wanted to walk along that road again, and I was determined to find the fourth bath. We were once again the only large mammals on the secluded road until we came across a Japanese serow, an endangered Japanese ungulate, which looks like a cross between a large mountain goat and a fat deer. It stared at us for a moment before running and disappearing into thick autumnal vegetation.

We continued walking and were surprised when two Japanese men in a jeep drove by us in the direction of Renge Onsen. We were also startled by the sight of an almost completely consumed rabbit corpse on a curve in the road. Fresh blood and intestines still stuck to scattered bits of white fur, indicating a fresh kill. Apparently, our arrival had disturbed another animal's meal.

Finally, after a long but refreshing hike, we reached the lodge. The two men who had passed us in a jeep were sipping canned coffee in front of the lodge. They said they were doing maintenance work. I asked if we could go to the hot springs,. They replied that the springs were closed and we could not go to them. That was disappointing news. I decided that not saying that we had used the baths the day earlier was a wise decision. Instead, we chatted while listening to bird cries. The men were friendly, and we learned a lot from them about the area and the springs.

The lodge is closed from October 20 to sometime in March each year. Each year is different, depending upon the weather. The road to the hotel is closed for a much longer time because of tumultuous winter storms and deep snow conditions. Visitors in March and April must use snowshoes or mountain skis to get there. The difficult journey requires about five hours of walking through deep snow. Helicopters deliver food and other supplies to the lodge.

During most of the year, one can drive to the lodge or the nearby basic campground. Tent space on the grounds is rented for five hundred yen—bring your own tents, etc. Camping gear cannot be rented. A room and two meals at the lodge costs 9,000 yen per person per night. There is also an indoor hot spring that I intend to enter and report on later. The remoteness of Renge Onsen and the determination of the lodge owners and workers keep the area natural, which is a factor in why it is one of the best Japanese hot springs that I have visited in approximately twenty years of exploring the springs of Japan. Renge Onsen is in the mountains of Itoigawa, Niigata. Renge Onsen Lodge has a webpage, but it is only in Japanese. To read about some other remote mountain hot springs in Niigata, click here or here.

Posted by Hotspring Addict at 11:06 PM