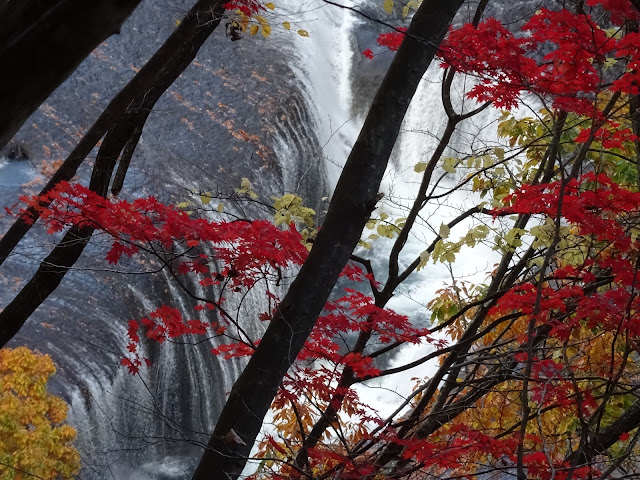 We are entering the season of fiery colors, powerful waterfalls, and hot baths with spectacular views. Grab your towel and make travel plans for the gorgeous mountains if you're in Japan. Those outside Japan will have to wait and salivate. 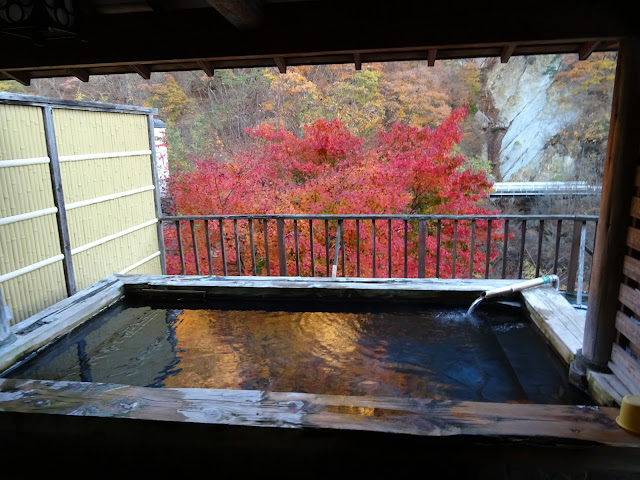 A friend told me that he wanted to enjoy fall in a relaxing and rustic area of Japan, where mass tourism had not changed the locals. I recommended Oigami Onsen in Numata, Gunma. Even before the pandemic, Oigami did not get much traffic despite the presence of one of the most unique and graceful waterfalls in Japan, small markets where you can meet the artists and vegetable growers, and rare festivals. 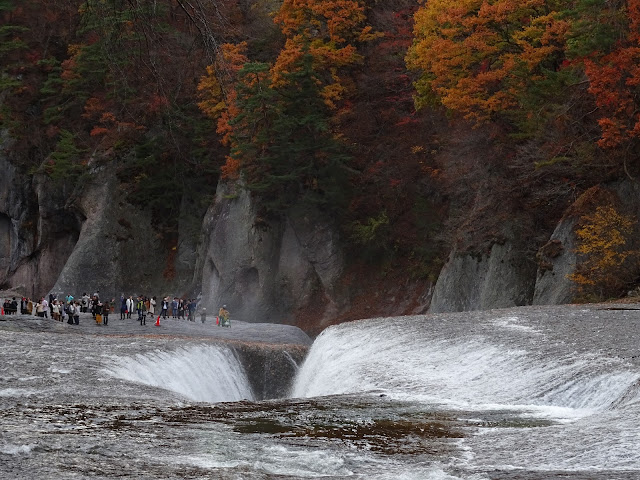 Fukiware Falls is the name of this unusual waterfall. Ware means crack in Japanese. The river suddenly plunges into a 7-meter-deep and 30-meter-wide crack in the riverbed.  This river, bursting with colors in fall, was designated as a natural heritage spot for its beauty, and the waterfall is listed as one of Japan's one hundred top waterfalls.
Walking and hiking trails of various difficulty levels (nothing particularly strenuous) and a small bridge take visitors to numerous breathtaking viewpoints. The river changes color depending on the angle of your view, sunlight, and water depth. 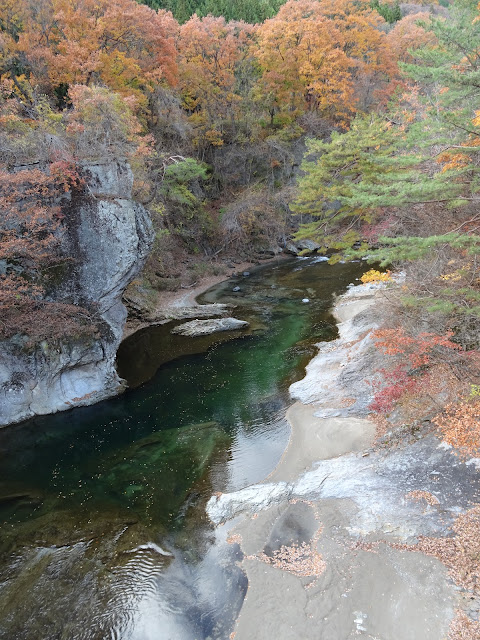 The path to the the trail heading to the falls leads through a small market evocative of Japan's countryside fifty years or so ago. The aromas of roasted salted and bamboo-skewered river fish, baked sweet potatoes, and hot amazake waft along the walkway. Traditional woven baskets, wooden dolls, and antiques are on sale, as are various wild mushrooms that might have been gathered that morning in the nearby mountains. 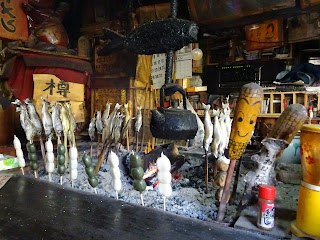 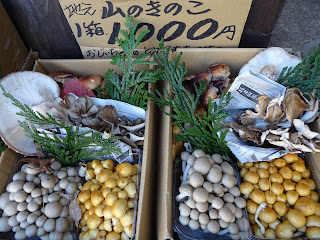 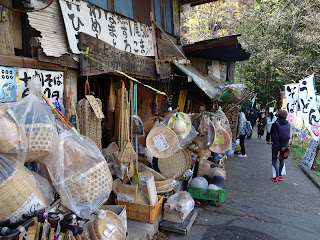 The main street (it is tiny) with hotels and ryokans in Oigami Onsen is a six-minute drive from Fukiware Falls. One can walk, as well. The accommodations in Oigami tend to be along the side of the river. Some are closed. Sleepy Oigami Onsen is far off the golden route of tourism in Japan. Walking along the small-town streets and the riverside are cures for stress. You'll discover another small market, tiny shrines and temples, and a mischievous supernatural being with a giant nose. His name is Tengu. 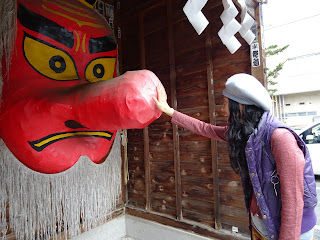 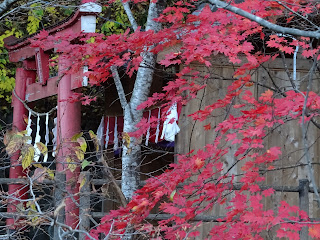 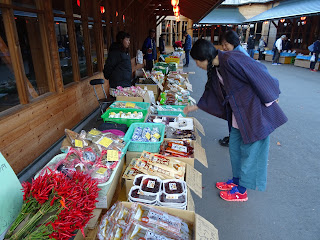 During our short sojourn in Oigami, we stayed at the mid-range Yamaguchiya Hotel. Built on the rim of a high riverbank, views from the public hot bath and most of the rooms were picturesque. Ingredients for dinner and breakfast meals were mostly locally procured fish, mushrooms, pickles, and vegetables. The building could use a bit more maintenance, but since this area of Japan does not get many tourists, probably a large number of businesses in the area are just holding on. The hotel's highlights were soaking in the bath while enjoying a wide view of rivers, cliffs, and autumn leaves. And the service provided in this mid-range hotel was as fine as that shown to guests at first-class hotels. 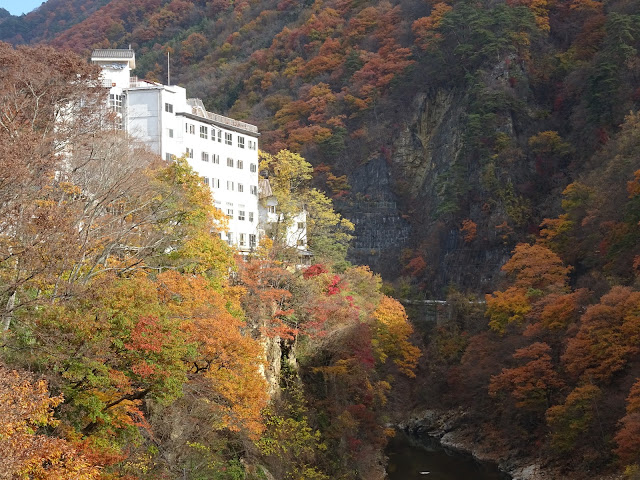 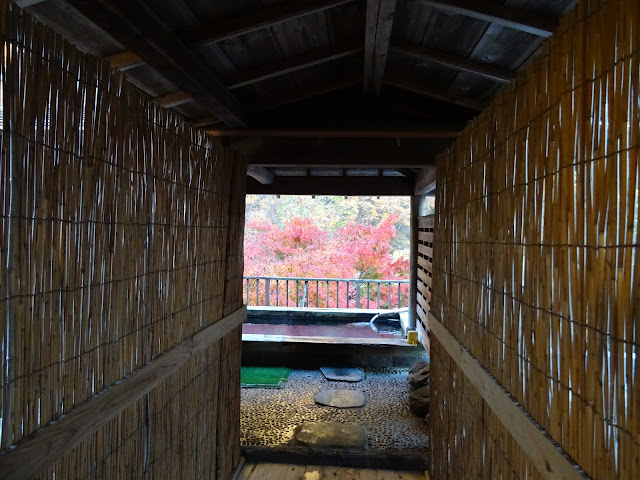 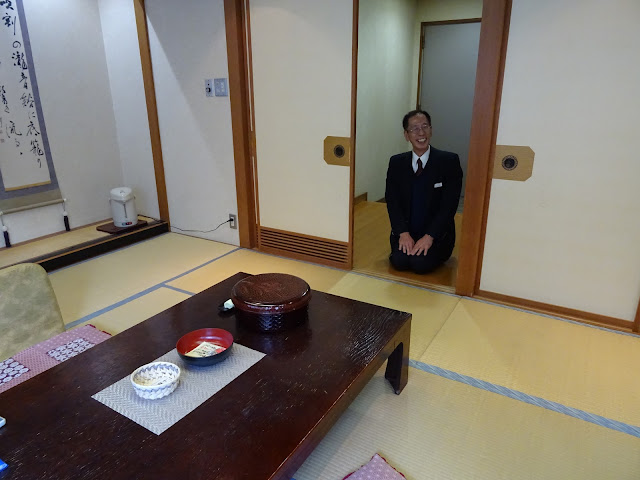 During one of our walks through the small town, we discovered a 108.22 m (355 ft) snake. It was holding bottles of local sake in its mouth. This snake is the one that the Guinness Book of World Records had certified as the longest festival snake in the world. 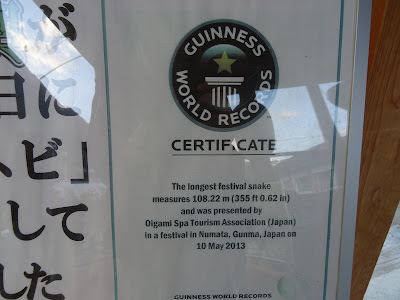 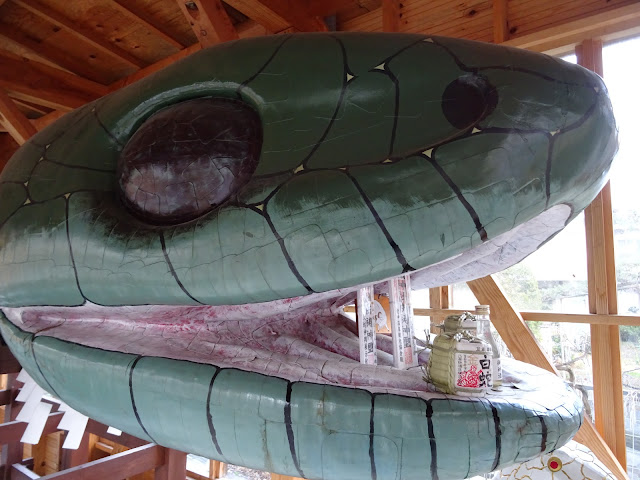 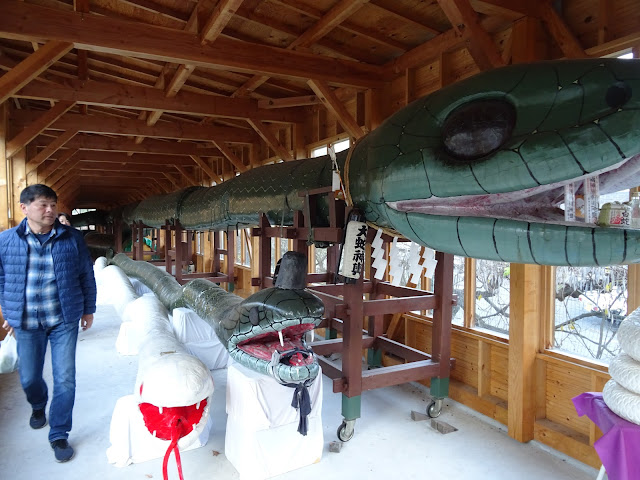 Legend has it that the waterfall was discovered by someone who saw a giant snake in the river. One of Nemuta city's webpages gives the following information:

"On May 3rd, a giant snake float weighing two tons and stretching to a length of 108 meters is brought out from its holding place at the Akagi shrine. On the 7th and 8th, 200 participants in the festival hoist the snake into the air and parade it around the streets. Adventurous souls are always welcome to join in."

I recommend Oigami Onsen to all readers seeking a relaxing time in a sleepy town surrounded by the earthy fiery colors of the Japanese autumn.

Posted by Hotspring Addict at 10:40 PM